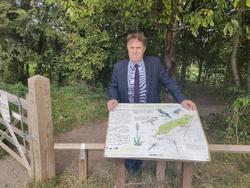 Julian Sturdy has today received notification from the Housing Minister, Christopher Pincher MP, that the long-running campaign to prevent the development of land adjacent to Askham Bog has been successful.

Following a recommendation from the Planning Inspector, the Minister has decided to dismiss the developer’s appeal against City of York Council’s decision to refuse permission to build 516 homes on land off Moor Lane, Woodthorpe.

Mr. Sturdy had previously led a cross-party group of MPs in writing to the Minister to raise concerns about the impact of the development on the unique ecology of the Askham Bog Site of Special Scientific Interest.

“In these difficult times I am delighted to report some good news for everyone who cares about the local environment here in York. Local people have been unanimous in their opposition to the development proposals near Askham Bog. The campaign has attracted national attention, including from Sir David Attenborough who rightly described the site as ‘irreplaceable’.

My thanks go to the Yorkshire Wildlife Trust who have been instrumental in informing the debate about the potential ecological damage to the SSSI and to everyone who has made representations at both a local and national level.

The work to conserve Askham Bog goes on and I hope that this news means it will remain a special place for generations to come.”