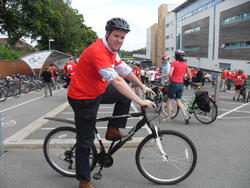 Julian is in high spirits after a meeting yesterday with Maria Miller MP, the Secretary of State for Culture, Media and Support, and a group of Conservative Yorkshire MPs, where it was announced that the government will be making £10million available to Yorkshire for underwriting the cost of hosting the Tour de France.

The meeting was secured by a group of Conservative Yorkshire MPs, including Julian, amid speculation that UK Sport were reluctant to fund Le Grand Depart because of concerns over its business case and delivery plan.

As a result, the government’s offer of £10million has conditions attached to ensure that the future business plan will be solid and watertight. Julian and the group of Yorkshire MPs, who have been working with the Yorkshire campaign for some time now, have vowed to do all they can to make sure Le Grand Depart meets these conditions.

“We’re absolutely delighted the money is secured and there is a wholehearted Government commitment to Yorkshire staging the Tour. There are provisos and we must make sure we have a delivery plan which is properly budgeted and which the Government has confidence in, because there have been issues and we can’t brush over that. But this commitment has been secured by MPs going directly to the Culture Secretary and is recognition of how important the Tour is to Yorkshire’s economy.

“My colleagues and I will continue to work very hard to ensure that Le Grand Depart is a roaring success and displays to the world the full extent of Yorkshire’s greatness.”