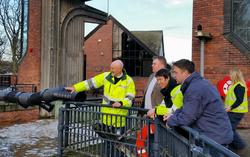 This Wednesday, Julian used a debate in Parliament in Westminster Hall to emphasise the importance of the sensitive use of flood defences, so that they do not protect some areas at the expense of others.

The debate was on upper catchment management, i.e. the management of the upper reaches of a river. ‘Hard’ flood defences, like the Foss Barrier in York, are essential in preventing actual floods, but some of the most useful longer-term methods of reducing flood risk involve reducing the total flow of water coming down the river through managing the whole river catchment. This can mean communities can be protected by measures like reservoirs and water storage areas far upstream of them that reduce the possible peak flow of the river in their area.

In the debate, Julian said “while hard flood defences are important we must remember that that is only moving the problem further downstream….a number of villages in my constituency, such as Acaster Malbis and Naburn, south of York, support the flood defences in York; but ultimately those only move the water downstream and move the problem elsewhere. That is why upper catchment is so important, and it is why we must look at the whole.”

City of York Council and York’s local Environment Agency team are exploring whole catchment management solutions as a way of reducing long-term flood risk in the York area. The Environment Agency are consulting on options for the whole River Ouse catchment this Spring, and also investigating the Swale, Ure and Nidd catchments. Julian has assisted Strensall with Towthorpe Parish Council in approaching the Environment Agency to suggest land in their area that is suitable for flood attenuation, so as to spread out any potential flood water peak.

After the debate, Julian said “it is vital that local residents can have confidence in flood protection for the York area, and that no neighbourhoods will be left behind. Whole river catchments solutions to manage and reduce the flow of water coming downstream are one of the best ways to ensure equal protection for all areas. I know residents in places like Acaster Malbis want these introduced as soon as possible, and I will continue to push for a flood defence strategy that protects all the communities of York Outer.”