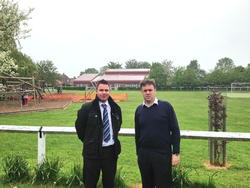 Julian spoke out yesterday against plans for over 100 new homes to be built at the northern tip of Strensall village.

Linden Homes’ proposed development of 102 homes to the north of Brecks Lane, Strensall was granted planning permission by the City of York Council in February this year, despite objections from over 100 local residents, the Parish Council, ward Councillor Paul Doughty and Julian.

Immediately following the decision, Julian wrote to the Secretary of State for Communities and Local Government, Eric Pickles MP, to ask him to call in the Council’s decision for scrutiny. After careful deliberation, Mr Pickles agreed with Julian and instructed Planning Inspectors to carry out a public inquiry to scrutinise the application. Of particular concern were the exceptional circumstances provided by the Council for allowing development on this site in the greenbelt.

The public inquiry began yesterday (Tuesday 15th October) at Strensall Village Hall and will run till the end of the week.

Julian, in one of the first statements to be delivered yesterday morning, said:

“Many of my constituents who attended the planning committee meeting in February were extremely disappointed with the way in which it was conducted by the Council and the lack of consideration that was given by some elected members and officers to the very serious concerns that were expressed. Needless to say it remains a deeply controversial decision in the village and I do sincerely hope this inquiry will allow these outstanding concerns to be properly addressed.

“The Council go on to state that the site’s characteristics are such that the land ‘does not serve any of the greenbelt purposes as set out in the NPPF or the Regional Spatial Strategy’. I strongly refute these claims. I fear that adding 102 dwellings to the northern tip of the village will detrimentally impact on the special character and setting of the village and will exacerbate the existing problems associated with the community being spread thinly over a long distance.”

He went on to highlight concerns over the local planning policy context, particularly in relation to last week’s shock stalling of the Local Plan, which includes Linden Homes’ application as an allocated site. He also cast doubt on the Council’s use of the lack of a 5 year land supply to justify this development on the greenbelt and cited concerns over the already inadequate infrastructure in the village, highlighting drainage, sewerage, traffic, parking and school capacity problems as examples.