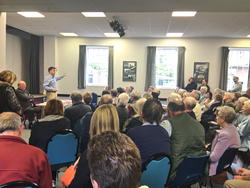 Julian has hit out at the City of York Council after it has emerged that two new large scale Traveller Sites have been proposed in the open countryside close to the quiet rural villages of Rufforth and Naburn.

The recent release of the Council’s ‘Local Plan Publication draft’, which has combined proposals from the ‘Preferred Options’ and ‘Further Sites’ documents and almost represents the authority’s final position on the Plan, has confirmed their plans for a 30 pitch Traveller Site immediately to the south of the Harewood Whin waste facility on Wetherby Road near Rufforth and a 15 pitch site immediately south of the York Designer Outlet in Naburn.

Following on from the Local Plan Further Sites consultation, an allocation for 7 pitches for Travellers in the centre of Elvington village has been removed, but the three pitches proposed for Travelling Showpeople have made it through to the ‘Publication draft’ stage of the Plan.

“The newly proposed Travellers sites in Rufforth and Naburn are currently within the greenbelt and to my mind, they represent completely inappropriate development. It appears that McArthur Glen have not yet been informed, let alone consulted, on the proposed 15 pitch site immediately to the south of the Designer Outlet. I have been in touch with the company and I know they will be deeply concerned about the potential ramifications to their retail park, which has been one of York’s great success stories since it first opened. I’ve already been receiving representations from anxious constituents in Fulford and Naburn who fear for the impact of the site on community life in their villages.

“Residents in Rufforth are also understandably apprehensive about the massive 30 pitch site that has been put forward on Wetherby Road. The Council has previously assessed a neighbouring field as being unsuitable for Gypsies and Travellers, due to being ‘out of character with the surrounding area’ and having an ‘unacceptable impact on the landscape’ – I cannot comprehend why they do not feel the same is true for this new proposal. Moreover, it cannot be safe or ethical for anyone to have to live so close to such a large landfill and waste recycling centre at Harewood Whin and I sincerely hope Yorwaste will have something say over the hazards and risks involved.”

Pictured: Julian leading a public meeting earlier this year in Elvington over the proposals for several Traveller and Travelling Showpeople pitches in the village.