Julian signs Book of Commitment ahead of Holocaust Memorial Day 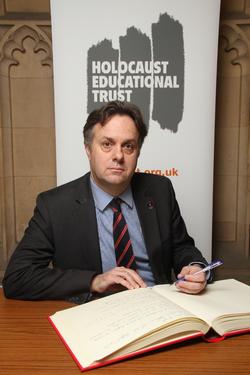 On Wednesday, Julian signed the Holocaust Educational Trust’s Book of Commitment at the House of Commons. In doing so, he pledged his commitment to Holocaust Memorial Day, and to honouring those who died, and those who survived and seek to educate younger generations about the reality of hatred and genocide.

Holocaust Memorial Day is marked on 27th January each year, the anniversary of the liberation of the notorious Nazi death camp Auschwitz-Birkenau, the location of the largest act of mass murder in history. The event commemorates the Holocaust, and subsequent genocides, and encourages people to understand the impact of these crimes, and appreciate the lessons the experience of the Holocaust has for today’s world. The theme of this year’s Holocaust Memorial Day is “How can life go on?” focusing on what happens after genocide, and our responsibilities in the aftermath of such a catastrophe.

The Chief Executive of the Holocaust Memorial Trust, Karen Pollock MBE, said “Our mission is to educate young people from every background about the Holocaust and its contemporary relevance. We are very grateful to Julian for signing the Book of Commitment, signalling a continued commitment to remembering the victims of the Holocaust as well as challenging antisemitism, prejudice and bigotry in all its forms”.

Julian said “Holocaust Memorial Day is an important time for people in York Outer and across the United Kingdom to reflect on the events of the Holocaust, and what they mean for the world today. We must never forget the enormity of the destruction and suffering these evil acts inflicted. As the Holocaust moves out of the realm of living memory, it becomes all the more essential that we remember the victims, and acknowledge those that survived. I would encourage my constituents to show their support for this important project.”