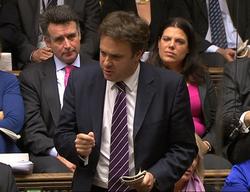 Julian has today secured a meeting for a delegation of local businesses with Patrick McLoughlin MP, the Secretary of State for Transport, to discuss the campaign for dualling the A1237.

Julian made the request during Prime Minister’s questions today, saying:

“The City of York is truly benefitting from the Government’s northern led economic plan and the Government is rightly investing in transport infrastructure across Yorkshire. With that in mind, would the Prime Minister agree to meet with me and a delegation of local businesses to discuss their campaign to dual the York northern ring road, which is seen, given the high levels of congestion, as a serious barrier to further economic growth for our city.”

“I think my Hon. Friend is absolutely right and I know what a problem this road can be. The point is that infrastructure investment does unlock growth. That’s why on Monday we announced the biggest roads programme in a generation, including £2.3billion for major roads in Yorkshire and the North East. I am very happy to arrange a meeting between him and the Transport Secretary to discuss this, but he’ll know we do have substantial plans to upgrade the Hopgrove junction, where traffic on the northern ring road gets on and off the A64 and we believe that will make a real difference.”

The development follows Julian’s recent pledge of support for a petition launched by a group of York-based businesses to dual the northern ring road, saying: “I congratulate all those involved in putting this together. We know that traffic congestion on the ring road which is now happening not just at peak times but any time in the day, is having a big impact on our businesses and economy.”

The petition was initiated by the York, North Yorkshire and East Riding Local Enterprise Partnership in conjunction with the Federation of Small Businesses (FSB), the Chamber of Commerce, York Professionals and Institute of Directors. The business leaders plan to travel to London in January to deliver their petition to No.10 Downing Street.

Reacting to Mr Cameron’s offer of a meeting with the Department for Transport, Julian added:

“The Prime Minister is right that York residents will benefit from the planned upgrades and grade separation of the Hopgrove roundabout, as part of the Government’s ‘Roads Revolution’. However, this will not resolve the longstanding congestion problems on the rest of the A1237, which is a Council-run road. Sadly I fear it is unlikely to be dualled if the status quo continues, predominantly because of the distinct lack of long term ambition within the Council. Perhaps fed up of their inaction, local businesses have rightly taken up the mantle to push for the major upgrades the northern ring road so badly needs. I will do absolutely everything in my power to facilitate their campaign and I look forward to getting the Transport Secretary round the table with York businesses to discuss this hugely important issue further.”