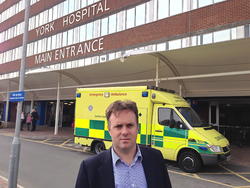 Julian has highlighted evidence from a Freedom of Information request, carried out by the Fertility Fairness Campaign, which casts doubt on the Vale of York CCG’s reasoning for backtracking on their previous plans to fund IVF at August’s 5-4 vote of the governing board.

A representative from the CCG’s governing board had said that free IVF in York could cost as much as £2million – the same amount required to fund 300 hip replacements, 43 full time nurses or 21,500 trips to A&E. However, Fertility Fairness’ FOI has seen the CCG acknowledging that, in reality, the service would only cost £288,514 per year. The £2million figure quoted by the CCG was instead based on an inaccurate assumption of the costs associated with making up for a five year backlog.

Julian has heaped criticism on the CCG for what he has called a “blatant attempt to skew the figures to suit their completely unsatisfactory decision”.

He added: “The CCG clearly have a lot to answer for. The reality is that the cost of delivering this core service would not be anywhere near as much as the £2million a year figured quoted, for the simple reason that many patients included in this five year backlog will now be well-past the age criteria. I call on the CCG to be straight with the people it is supposed to serve and look again at the very strong case for providing IVF on the NHS in our area.”

The news follows the recent announcement of a new quality standard published by the National Institute for Health and Care Excellence. The standard is intended to remind NHS commissioners that IVF treatment is a core part of NHS services and should not depend on where you live.

Julian recently welcomed NICE’s new quality standard, by urging the Vale of York CCG “to take a long hard look in the mirror and to reassess their position as soon as possible, in light of this new guidance from NICE”.