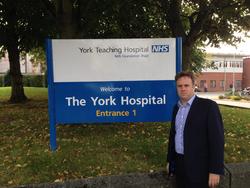 Julian has repeated his calls on the Vale of York Clinical Commissioning Group to fund free cycles of IVF. The move follows the very recent publishing of a new quality standard by the National Institute for Health and Care Excellence (NICE), which re-emphasizes the importance of fertility as a core NHS service.

NICE is the independent body responsible for driving improvement and excellence in the health and social care system and recommends that all CCGs should provide a full three cycles of IVF on the NHS.

NICE’s Deputy Chief Executive, Professor Gillian Leng criticised the Vale of York CCG for failing to provide any infertility treatment whatsoever, saying “it is unacceptable that parts of England are choosing to ignore NICE recommendations”.

Julian, who recently met with representatives from the Fertility Fairness Campaign in Parliament, welcomed NICE’s new quality standard, describing it as “yet further evidence that the York CCG must now urgently reconsider its position on these core services”.

“I know from the many constituents who have contacted me on this issue that infertility itself has an absolutely awful impact on people’s lives, causing stress and depression with the potential to tear otherwise healthy relationships apart. I cannot imagine how frustrating it must be for families in our area to go through all of these emotions, only to find that treatments are available everywhere else in the country except York. I urge the CCG to take a long hard look in the mirror and to reassess their position as soon as possible in light of this new guidance from NICE.”