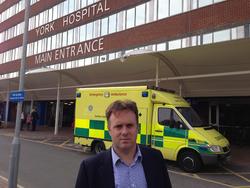 Following the recent news that York and the communities surrounding the city look set to be the only place in the Country in which residents will not be offered any free cycles of IVF treatment on the NHS, Julian has called on the local health authority to review it’s position.

The Vale of York Clinical Commissioning Group (CCG), which covers the City and the York Outer constituency, as well as other neighbouring communities, such as Selby and Tadcaster, will shortly be the only local health authority in the UK not to offer the treatment after health officials on the CCG in Scarborough and Ryedale recently voted to reintroduce IVF on the NHS. The Vale of York CCG’s current position is contrary to guidance from the National Institute for Health and Care Excellence (NICE), which recommends CCGs provide three full cycles of IVF to eligible couples.

Julian, as a long time campaigner for fairer health funding and better access to treatments for patients in York and North Yorkshire, has previously made representations to the Vale of York CCG on this very issue and he has met with IVF campaign groups. Commenting on the recent announcements, Julian said:

“While I welcome the Scarborough and Ryedale CCG’s decision to consider funding IVF treatment, these positive announcements only serve to remind me of the stark contrasts with the situation in York. The Vale of York CCG looks set to be the only local health authority in the Country that refuses to fund any free cycles of IVF, despite all CCGs being recommended to fund a full three cycles by the National Institute for Health and Care Excellence (NICE).

“I know from the several constituents who have contacted me on this matter that infertility can have a devastating effect on people’s lives, causing significant distress and in some cases, depression. I have made a number of representations to the York CCG, calling on them to review their position on IVF and I will be writing again following these announcements. I do have some sympathy with our local healthcare commissioners, who have been doing a superb job in balancing the books after inheriting massive debts from the now defunct Primary Care Trust. But at the same time, I hope that the positive step forward taken by Scarborough and Ryedale will give York the necessary encouragement to offer this life-changing treatment.”