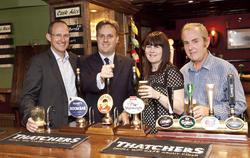 Amidst the overall disappointment that York will be leaving national lockdown restrictions on December 2 into Tier 2 (High Alert), Julian has particular concern regarding the so-called ‘substantial meal’ rule requiring food to be purchased with an order of an alcoholic drink.

Julian believes landlords and breweries have already made considerable sacrifices this year as part of our country’s joint effort to tackle the COVID-19 pandemic. They have invested a substantial amount of money to ensure that pubs reopened in a COVID-secure manner in July, despite the rule-of-six and the 10pm curfew offering little prospect of profit for many venues. Further sacrifices have been made during the second national lockdown pushing many already stretched businesses close to the brink. Worryingly, according to CAMRA’s Save Our Pubs campaign, 81% of pubs in Tier 2 say they won’t even be able to break even under these restrictions.

Those worst affected will be traditional wet-led pubs which often have the most character and are heritage features in communities often dating back in excess of one hundred years. This will consolidate the already excessive influence pub chains have on the industry as they’re able to absorb losses across their brands and potentially even expand further by taking on venues forced to close.

The impact of these closures will not just be limited to the pubs themselves. Wet-led pubs tend to also specialise in real ale and support many small breweries in their region. Yorkshire is home to many small independent breweries and, while many have adapted to offer home deliveries, they’re still suffering continued losses compared to usual trade.

Wet-led pubs have implemented the same risk management measures to ensure a COVID-secure environment for customers as every other part of the hospitality sector, yet Julian believes they’re being treated unfairly and used as a scapegoat for continued infections despite no publicly available data showing that to be the case.

Furthermore, Julian is worried that the ‘substantial meal’ rule will affect those on the lowest incomes the most, excluding them for the opportunity for some social relief. At a time when numerous reports have already highlighted the worrying impact of lockdown restrictions on mental health, he strong believes should not be enacting rules that further isolate a large section of the public.

Julian has written to the Secretary of State for Health and Social Care, Matt Hancock MP, to ask that current proposed restrictions are reviewed, and wet-led pubs are treated on par with other hospitality venues and given a chance to survive under Tier 2 restrictions. He understands there is some hesitation that alcohol can lead to safety measures not being strictly followed but that is a matter for landlords to enforce with the support of their licencing authority. Individual responsibility must play a factor in our fight against this virus as is being shown in other sectors and activities where restrictions are due to be relaxed.

Julian has also written to the Chancellor of the Exchequer, Rishi Sunak MP, to request a further extension of the VAT cut for the hospitality sector. As business rates are re-introduced and VAT levels returns to 20%, Julian would also like to see a staggered approach so outgoings for businesses gradually increase as restrictions are hopefully relaxed allowing for greater custom.

Furthermore, he would like to see current proposed changes to beer duty reviewed to help offer further support to pubs as well as smaller breweries. As well as being blessed with many fantastic pubs, we are also fortunate to have a range of great breweries locally so any support must also help the entire supply chain. Earlier this year Julian joined Ben Everitt MP in writing to the Chancellor to call for further support for small independent breweries by halving beer duty bills, allowing 60 days for beer duty to be repaid and reforming Small Breweries’ Relief.

Current proposals to reform Small Breweries’ Relief are not satisfactory in Julian’s opinion so he is currently lobbying Ministers, along with Ben and other MPs who originally joined the campaign, to help protect relief for the smallest breweries but also help ensure that the reduction in support for the largest breweries receiving relief doesn’t disincentivise growth.

Julian will continue to push for changes to current guidance to ensure that our local, community pubs survive the pandemic and are allowed to thrive again when normal service resumes.