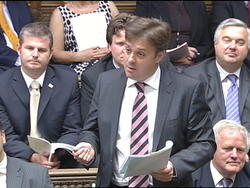 This week in Parliament, Julian raised the issue of the growing rates of undiagnosed cases of dementia in York and North Yorkshire to Jeremy Hunt the Secretary of State for Health.

In the House of Commons Julian posed the question:

“In North Yorkshire and York, only 43% of those suffering from dementia receive a diagnosis. Given the ageing population in the county that means that about 7,000 people with dementia remain undiagnosed. Does my right hon. Friend agree that the clinical commissioning groups have a large role to play in the delivery of dementia services, and will he tell us what support those groups will get?”

Jeremy Hunt responded by sympathizing with the number of people undiagnosed and their families, stating:

“We need a massive transformation, and we need to make it much easier for people to get a diagnosis. We need much better understanding among GPs and among hospitals as well.”

Commenting, Julian stressed his commitment to tackling the rising issue of dementia, especially with regards to the growing number of people who have yet to received a diagnosis:

“I believe it is imperative that action should be taken to make sure we tackle the problem now and not in several years when it becomes even more endemic, given the ageing population we have in North Yorkshire and York, it is important that we get the support that this county deserves to tackle the issue.

I will continue to follow the developments this Government has promised in relation to dementia care and diagnosis, and continue to push for fairer funding for North Yorkshire and York.”