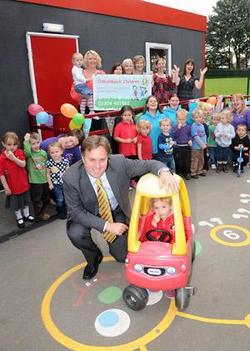 Julian Sturdy, Member of Parliament for York Outer, yesterday hosted a Westminster Hall debate on the subject of nursery funding, specifically concerning the problems surrounding the Free Entitlement scheme the Government provides for 3 to 4 year olds and the impact on local nurseries.

Nursery funding has been a contentious issue for some time with the price of childcare having risen substantially over the last few years. With regards to the Free Entitlement, it seems that the money given to local authorities is not being passed on in full or correctly to nursery providers, therefore nurseries are losing out in funding. This low level of funding is resulting in the increasing price of childcare as providers have to cross subsidise these funded places by increasing the fees they charge for hours they sell over and above the free hours and to families not eligible for funding.

“The Government is the biggest procurer of nursery places however they are also the worst culprits when it comes to paying for the places they have procured… 84 per cent of nurseries claim that the funding they receive does not cover their costs. In fact the average shortfall for free entitlement hours is around £547 per child, per year.

“Under the Free entitlement scheme the Government provides money to local authorities across the country who are then responsible for channelling it to the nursery providers. However, there is a great disparity across the country in how much is spent on childcare by individual local authorities…The National Audit Office found that free entitlement varied from £2.78 to £5.18 per hour, with the national average placed at £3.95 by each local authority. My constituency receives only £3.38 an hour from the City of York council.

“There is also great concern over the way the childcare element of working tax credit is administered with the funding going to the parents rather than direct to the nurseries. This is sadly causing cash flow problems for some nurseries as sometimes not all of the funding is passed on…One nursery has told me that its level of bad debt has gone up ninefold this year, and sadly for many, that is unsustainable. Consequently, direct funding to the provider could solve a number of problems.”

The Minister in his response to the debate acknowledged the problems with nursery funding that Julian raised and also agreed to his specific request for a meeting with a delegation of nursery providers from York to discuss the matter further.

To watch the debate in full, press play below and skip to 16.55: