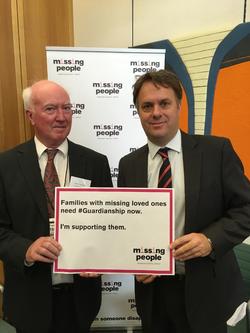 During a parliamentary question session today Julian raised concerns with the delay in implementing provisions of the Guardianship (Missing Persons) Act 2017. This legislation is known to most as ‘Claudia’s Law’ after Claudia Lawrence who went missing in York back in March 2009.

Guardianship allows families to manage the financial and property affairs of a person who goes missing. This campaign has been led by Julian’s constituent Peter Lawrence, Claudia’s father, and the charity Missing People.

Although the Act was passed into law, receiving Royal assent in April 2017, secondary legislation is not yet in place to allow the families of missing people to make applications to become guardians of their loved one’s affairs.

During the session in the House of Commons, Julian sought assurances that families would be able to make use of guardianship legislation before the end of the calendar year.

Responding, Mr Edward Argar, Parliamentary Under Secretary of State at the Ministry of Justice responded with the affirmation that the Government is “keen to make as rapid progress as possible.”

“On top of the heartache caused when loved ones going missing, families face the threat of losing their home or being chased for credit card debts because they cannot yet become legal guardians. Therefore, I would have liked clearer assurance from the Minister and a commitment to a date for provisions to come into force.

I understand that the required secondary legislation is complicated and it is crucial that the Ministry of Justice gets this right, but reforms were overdue even when the Act was passed over a year ago. A little more patience is a lot to ask for.”