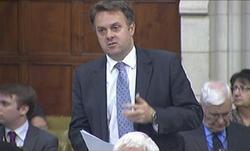 This morning Julian spoke in a debate over access to medicines for people with Cystic Fibrosis and other rare diseases.

Julian was among a handful of MPs who supported the debates application and was very pleased that it was granted an hour and a half debate today. The debate came about due to the Cystic Fibrosis Trust’s ‘Stopping the Clock’ campaign, which aims to ensure that as many people as possible will have access to precision medicines, which treat the underlying genetic causes of cystic fibrosis, not just the symptoms.

Speaking in the debate Julian said:

“My hon. Friend the Minister is absolutely right to say that the medical landscape is changing hugely at the moment, but does he feel that the wider implications of new medicines are being fully explored by NHS England and NICE? We have heard about the huge consequences of cystic fibrosis for not only the sufferer but their wider family and the NHS. Does he feel that those wider consequences are being fully explored?”

In response the Minister stated:

“My hon. Friend puts his finger on a profound challenge at the heart of this landscape: in order really to assess the impact of innovative treatments, we need a much better handle on the existing costs, many of which are hidden, that come with a diagnosis. For that reason, I am spearheading work in the Department of Health to drive through a system of per-patient costing, so that we can begin to get a much clearer handle on what a CF diagnosis means on day one for both the patient and the health economy. That will allow NICE and NHS England to develop much more intelligent systems for assessing whether an innovation really represents good value.”

Reflecting on the debate Julian said:

“I welcome the Ministers comments and it is brilliant to see this important issue debated in Parliament. Cystic Fibrosis is a terrible, inherited disease caused by a faulty gene and there is currently no cure available. Each week five babies are born with Cystic Fibrosis and two people die, therefore we need to do all we can to promote access to precision medicine. I have previously visited the York Adult Cystic Fibrosis Unit at York Hospital to see the great work undertaken on a daily basis, and I am also a member of the Cystic Fibrosis APPG. Therefore I will continue to lobby the Government over this important matter and will follow up on today’s debate by asking further questions of the Secretary of State.”