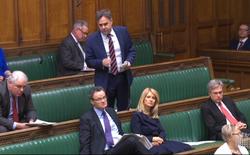 This afternoon Julian pressed the Exchequer Secretary to the Treasury, Robert Jenrick on the progress of funding for the dualling of the A1237 York northern ring road. Speaking during Treasury Questions in the Commons chamber Julian expressed his concern that traffic congestion on the A1237 was holding back the productivity of local businesses and argued that dualling the road would provide a major boost to economic growth in the city and the surrounding area.

Responding to Julian, the Minister reported how much his Treasury colleague, Liz Truss had enjoyed visiting the York Outer constituency, to see for herself the £10 million investment that Poppleton firm Pavers Shoes are making in enhancing the productivity of their business.

The Minister assured Julian that the Government is committed to supporting expanding local businesses such as Pavers by increasing transport investment in the North of England. He reiterated last autumn’s announcement from the Department for Transport that the scheme for the dualling of the York northern ring road is in development through the Government’s Major Road Network fund.

After leaving the chamber Julian said:

“The Minister’s comments in response to my question today reinforce the encouraging messages that we have received from the Department for Transport that the York northern ring road will be one of the first transport routes to benefit from Government investment through the Major Road Network fund.

This is a positive development for businesses and residents in York who are keen to ensure that transport networks are improved to reflect the city’s growing population. I will continue to lobby the Government in support of the city council’s funding bid and impress upon them the importance of dualling the A1237 to reducing congestion and unlocking economic growth in York.”