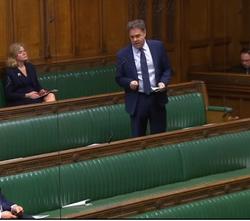 Yesterday, Julian asked for clarification from the Government on the progress of City of York Council’s bid for infrastructure funding to unlock the York Central site for redevelopment.

It follows on from the Chancellor’s Spring Statement in which he announced that £717 million will be released from the £5.5 billion Housing Infrastructure Fund to invest in projects in London, the Oxford-Cambridge Arc, Cheshire and the border regions of England and Scotland.

In light of this announcement, Julian questioned the Leader of the House of Commons, Andrea Leadsom on whether the Government would provide a statement on the progress of the £77 million York Central bid which will fund the infrastructure needed to deliver up to 2,500 new homes on the 72 hectare brownfield site.

Mrs Leadsom responded that the Government will announce further allocations for Housing Infrastructure funding in the Budget later this year.

After speaking in the Commons, Julian said:

“I welcomed the Chancellor’s Spring Statement on Tuesday and was encouraged by the overall resilience of the UK economy. Unemployment is forecast to remain at an historic low, wages are increasing at their fastest pace for a decade and the national debt continues to fall as a percentage of GDP.

The Chancellor’s commitment of £717 million from the Housing Infrastructure Fund for projects around the country is also to be welcomed, but clarity is needed on the progress of City of York Council’s bid to unlock the York Central brownfield site.

The development of York Central will make a vital contribution towards the city’s long-term housing needs and do so in a way that does not add further pressure on the York greenbelt, something that would be to the environmental detriment of the whole city. ”