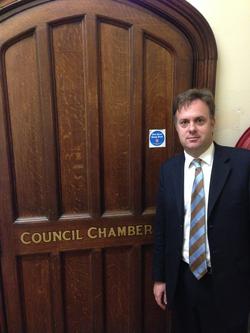 The petition, which calls on the Council to rethink its draft Local Plan proposals to take 2400 acres out of the greenbelt for development, has achieved 1200 signatures – 200 more than required to prompt a debate in the Council chamber.

Before presenting the petition to Council, Julian gave a short, emotionally-charged speech, in which he appealed to the Council to review their development proposals.

In his speech, he said:

“For me, and so many of my constituents, the greenbelt is as important to the identity of this great City as the Minster, the City Walls, the NRM and of course, the fantastic people who live here and make our great city. It is ultimately an essential part of York’s DNA.

“In its current form, the Council’s draft Local Plan will not secure our established greenbelt for future generations, it will change it irrevocably. It will not define our greenbelt, it will completely redefine it.

“The pure scale of this proposed development on the established greenbelt will have a devastating impact on our rural communities. Our rural infrastructure, which is already nearing its capacity, will not cope with what is being proposed. Far from having the positive impact on the local economy, which the Council desire, this Plan can only end in disaster for York on the economic stage.”

“The local plan consultation, talking on the doorstep and the response to Julian’s petition have clearly shown residents’ disagree with this administration’s plans to carve up York’s Greenbelt. The Council must listen and give a Local Plan based on real housing need and suitable sites rather than political dogma.”

Pictured: Julian at the City of York Council Chamber in the Guildhall, St Helen’s Square.