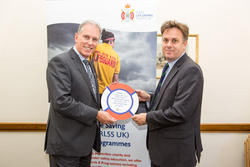 Julian has signed up to support the UK’s leading drowning prevention charity in its work to provide water safety education and lifesaving awards across the country.

Representatives from The Royal Life Saving Society UK (RLSS) made the trip to Parliament ahead of their national campaign, Drowning Prevention Week, which runs from June 21 to 29. CPR workshops and water safety advice sessions were held throughout the afternoon and Julian was invited to find out more about the charity and its work, as well as sign up and ‘pledge to support water safety education to all under 18- year olds-in the UK’.

RLSS UK President, Peter Moyes, said: “Tragically, more than 30 people drowned in just seven weeks during last summer’s heat wave. Around 400 people accidentally drown in the UK every year – one every 20 hours – and thousands more have near drowning experiences.

“These deaths could have been avoided and the society and its volunteers work tirelessly all year round to provide water safety education as well as lifesaving courses for all ages to try and reduce this figure and save lives. We were overwhelmed with the support offered by MPs during our session and can’t thank Julian enough for pledging to help us in our efforts, not only during Drowning Prevention Week but all year round, especially to get water safety education taught in all schools.”

Following the meeting, Julian said “The work the RLSS do in York, especially surrounding the safety of children, is vitally important and I was pleased to be able to meet with them to discuss their plans for the future. I will be writing to the Education Secretary, Michael Gove, to urge him to make river safety a key part of the national curriculum. I will also be writing out to every school in my constituency with information packs as every child should be able to safely enjoy swimming pools and the seaside this summer.

With the rivers Ouse and Foss running through the city, it is essential that our children are fully aware of the safety implications of our waterways. Unfortunately, there have been a number of tragedies in York which makes educating children all the more important. I will also be supporting the York Rescue Boat charity in an effort to raise funds for this excellent cause’.