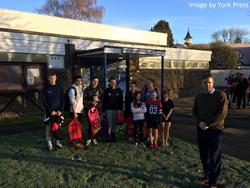 Last Saturday, Julian visited New Earswick Swimming Pool where he met with campaigners, pool users and parents to discuss the shock decision by the Joseph Rowntree Housing Trust (JRHT) to close this facility.

Since this announcement in October to close the pool, Julian has corresponded with many constituents who have all expressed their level of concern over this decision and the impact it will have on the community. The pool is used by hundreds of people every week and is one of the only pools in York that is particularly suitable for teaching young children to swim, which makes it all the more important to keep open.

Julian was keen to act straight away to help support the local campaign to save the pool and so he initially met with Shaun Rafferty, the Strategic Director of Communities at JRHT on Monday 23 October to discuss the decision in more detail and to push for a reconsideration.

Commenting at his visit to the pool on Saturday Julian said, “From talking to everyone here today it is absolutely imperative that we do try and keep this pool open. Obviously the JRHT are looking to close the pool towards the middle of next year, but we’ve got to make sure we get as much time as we can now to see whether the Friends of New Earswick Pool can look at taking over the running of the pool.

I’m here meeting with them, talking to them, doing whatever I can to help and listen to what they’ve got to say. I’ve also met with the Trust to really push the case to make sure that we do all we can to try and keep this vital, important facility open”.

Following this visit, Julian then met with Campbell Robb, the Chief Executive of Joseph Rowntree Foundation where he was able to make representations of all the points raised to him by campaigners at the pool and make Mr Robb aware of the strength of feeling within the community over this decision. Julian was also keen to push Mr Robb on the social responsibility of the Trust to the community.

Looking ahead, Julian’s main focus is helping to facilitate the user groups attempt to takeover the running of the pool by continuing to pressure JRHT for the easing of timescales and encouraging them to work with the user groups during this difficult process.