Julian Pledges His Support for ‘The Biggest Fight Against Bone Cancer’ 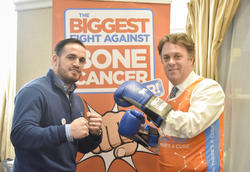 Julian has voiced his support for The Biggest Fight Against Bone Cancer, a new campaign to raise much-needed awareness of and funds for primary bone cancer, at a parliamentary reception hosted by the Bone Cancer Research Trust.

Every year in the UK and Ireland around 600 new cases of primary bone cancer are diagnosed and around 300 people die from these cancers. Young people are most likely to be affected as the disease has a peak incidence between the ages of 10 to 24 years old.

Following the event Julian said: “I was disturbed to hear that survival rates for bone cancer have remained unchanged for over 25 years, and that patients who survive the disease often face disability as a result of life-altering surgery and treatment. It was great to hear more about the crucial work that the Bone Cancer Research Trust is doing to improve early diagnosis and treatment options and I’m pleased to have shown my support for The Biggest Fight Against Bone Cancer.”

Mat Cottle-Shaw, Head of Fundraising and Communications, said: “MPs may previously have been unaware that their constituents have been affected by primary bone cancer, which continues to be an under-profiled and under-funded disease. We need all MPs to recognise the importance of our campaign and how crucial it is to primary bone cancer patients and are very grateful to Julian for his interest. We look forward to working with Julian in the future to help raise vital awareness of bone cancer in York Outer.”

Julian also met with Jamie Wood (pictured with Julian), a former bone cancer patient and amateur boxer who was diagnosed with Ewing Sarcoma in 2010. Jamie underwent 16 courses of chemotherapy and 3 major operations as part of his treatment.

Jamie said, “Against the odds, I’ve beaten bone cancer and even returned to the boxing ring. Now I want MPs to understand what bone cancer patients go through and to back The Biggest Fight Against Bone Cancer to help raise much-needed awareness and funds.”

To find out more please visit www.thebiggestfight.org and follow #TheBiggestFight on social media to get involved with the campaign.