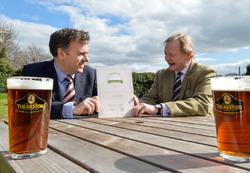 Julian has received a special award for his work in supporting – and promoting – the region’s pubs and breweries.

He was presented with the “Parliamentary Beer Champion 2015 ” award by Simon Theakston, Executive Chairman of T&R Theakston Ltd and former Chairman of the Yorkshire British Beer & Pub Association (BBPA).

The honour is a joint initiative from the BBPA and Society of Independent Brewers (SIBA), both of whom thanked Julian’s contribution in helping to “deliver successive reductions in beer duty” as well as being a “strong voice for Britain’s brewers and a champion of tour national drink”.

Both parties have been pooling their resources lobbying Parliament for yearly reductions in beer duty.

Julian said: “I’m honoured to receive this award from both organisations, and I am delighted to see that the hard work in lobbying for a reduction in beer duty has paid off again.

“Pubs and clubs are at the beating heart of our communities and helping to ease the tax burden for them three years in a row is excellent news indeed.” 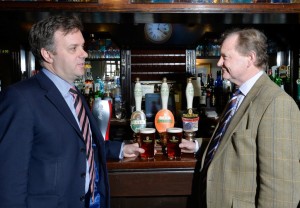 Simon Theakston said: “Julian justifiably deserves this award as he is a great supporter of our industry. He has campaigned year in, year out for cuts in beer duty.

“Thanks to him and his colleagues, not only have we had a third cut in this tax, but the beer duty escalator has been scraped altogether.”

Brigid Simmonds, Chief Executive of the British Beer & Pub Association, said: “MPs of all parties made a huge difference in achieving the second historic duty cuts in 2013 and 2014, and deserve our thanks and recognition.”

SIBA managing director Mike Benner said: “We are enormously grateful to the MPs whose support for British beer over recent years has created a far more optimistic outlook for our industry.

“As a result of the consecutive beer duty cuts, our members feel more confident about the future of British brewing and are investing in their business and creating local employment, with an estimated 1,600 new jobs in SIBA breweries last year.

“With at least one independent brewery now operating in almost every parliamentary constituency, the Beer Champions announced will I’m sure be invited to celebrate their success in their home town, with a pint of great, locally brewed beer.”

Pictured: Julian enjoying a pint with Simon Theakston after receiving his award.