Julian Meets with Families of Missing People as Part of Legal Guardianship Campaign. 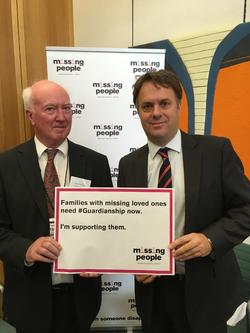 Julian is urging the new Government to introduce powers that would mean families of missing people could protect their missing loved one’s finances and property.

An event in Parliament today, organised by the All Party Parliamentary Group for Runaway and Missing Children and Adults, highlighted the plight of families with a missing loved one. Julian met some of the families whose loved ones have gone missing and listened to the difficulties they have faced.

Earlier this year Julian wrote a joint letter with Kevin Hollinrake, MP for Thirsk and Malton and Rachael Maskell, MP for York Central to David Cameron asking him to bring forward legislation in May’s Queen’s Speech. The letter, which was signed by over 70 MPs, received cross-party support but efforts are now being made to ensure this important reform is on the new Government’s radar.

The campaign for guardianship outside Parliament has been led by Missing People and a number of families dealing with emotional, legal and financial strain of having a missing loved one. Those include Julian’s constituent Peter Lawrence, father of York chef Claudia, who has been missing since 2009, and Rachel Edwards, sister of missing Richard Edwards of the Manic Street Preachers. Financial and legal organisations also support the guardianship law as it would provide them with a clear legal mandate for dealing with families in this situation.

Speaking afterwards, Julian said: “meeting with Peter and the other families here today really brings home how important it is to make sure people are supported in their darkest of times. Whilst it is right that people naturally empathise with the shock and emotional trauma that occurs when a loved one goes missing, the inability to handle their financial affairs means that people can lose their homes and struggle to care for young dependents.

“The Government recognises the severity of this matter and committed to bringing forward proposals as soon as parliamentary time allows. Today is all about making sure Ministers understand the importance of this matter and gaining political support for reforms to be brought forward as soon as possible in order to deliver practical help to a large number of families.”

Susannah Drury, Director of Policy at the charity Missing People said: “We are grateful for MPs support in making the case to the Government for introducing guardianship powers as soon as possible. Without these powers, families are forced to see the life they desperately hope their missing loved ones will return to fall apart.”

Recent figures from the National Crime Agency highlight that in 2014/15 740 adults were reported missing to North Yorkshire police force. Missing People is the only charity in the UK that searches for and supports missing people and their families.