Julian meets with CLA to discuss ban on Sky Lanterns 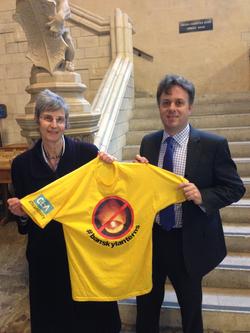 Julian has in the past called on the Government to consider banning Sky Lanterns, which he branded “Flying Death Traps” in light of the destructive consequences that can result from stray lanterns.

Following the meeting yesterday, Julian said “I was delighted to be able to discuss the matter in more detail with Nicola, who knows firsthand just how hazardous Sky Lanterns can be to rural buildings and wildlife. I was also pleased to hear the news that responsible retailers like Tesco’s and Poundland have now decided to withdraw such products from their shelves in response to highly successful campaigns, such as that run by the Farmers’ Guardian to educate people of the potential dangers.

“The CLA and I are in agreement that the best way forward is to secure a debate on the matter in Parliament. Other likeminded MPs from all parties will then be able to contribute their views on the issue and we will be in a strong position to move forward as a likeminded coalition.”

Julian concluded by saying “Sky Lanterns are banned in many countries around the world, including Australia and New Zealand, Brazil, Argentina, Spain, and parts of Canada and the USA. Several German states have also recently outlawed Sky Lanterns following the horrible death of a ten year old boy in a house fire in Siegen, Westphalia. My aim of course is to persuade the Government to act now before a similar tragedy occurs in this country.”