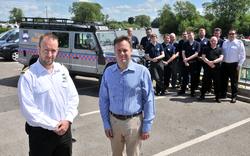 As part of Drowning Prevention Week, Julian met with the crew of the York Rescue Boat on Saturday to support their crucial work of saving lives across the city.

Meeting Dave Benson and the York Rescue Boat crew, Julian said, “I cannot praise the work of the volunteers enough for helping to keep people safe around our cities rivers. It cannot be emphasised just how important their work is to preventing drowning from happening and I hope that local people recognise that they are the unsung heroes of York and should be commended for everything they do.”

As the Vice-Chair of the All Party Parliamentary Group for Water Safety and Drowning Prevention, Julian recently met with representatives from the Royal Life Saving Society UK (RLSS UK) in Parliament where he pledged to support the charity’s campaign to reduce the rate of drownings both in York and across the country.

Following the event, the RLSS President, Peter Moyes, said “We were overwhelmed with the support offered by MPs and can’t thank Julian Sturdy enough for pledging to help us in our efforts, not only during Drowning Prevention Week but all year round, especially to get water safety education taught in all schools.”

Julian also met with Jackie Roberts, the mother of student Megan Roberts, who tragically drowned in the River Ouse in January last year. She said: “I am working with the RLSS UK as my daughter’s life meant so much and I want to do something in respect to her, and to prevent further tragedies. It was great to talk to Julian and hopefully raise the importance of the charity’s work and the importance of water safety education.”

After the meeting in Parliament, Julian said “I am very grateful to have been able to meet with Jackie and all the representatives from the charity. Sadly, drownings occur far too often in York and I hope that we can all work together to help raise awareness about the dangers of rivers in order to prevent such tragic accidents from happening in the future.

Pictured below: Julian pledging his support to the Royal Life Saving Society UK 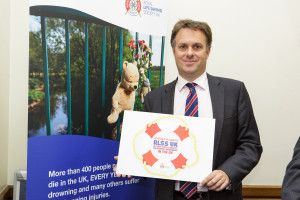