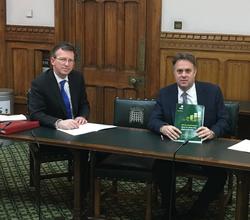 Acting in his capacity as Chair of the All-Party Parliamentary Group for Rural Business, Julian asked him to take on board the findings of the group’s report into upgrading rural 4G mobile, based on evidence hearings with the 4 major mobile providers (O2, Vodafone, EE and Three) in summer 2018.

The report proposes the introduction of a single rural roaming network in hard to reach areas, tougher requirements on mobile providers to publish their coverage rollout plans, and more attention to new mobile infrastructure in local planning.

4G mobile coverage is up to 10 times faster than 3G, and allows for videos to be streamed to phones. The government’s own figures estimate that achieving the 95% coverage ambition could add £75 billion to the British economy.

After meeting the Secretary of State, Julian said:

“I found Jeremy Wright very receptive to the points I raised, and I am satisfied that he is fully aware of the need for smaller communities and businesses based in rural areas to have the same access to digital infrastructure as in urban areas.

However, it is vital that these good intentions at the centre of government are translated into better results on the ground, and I will continue to focus on securing tangible improvements.

The variation in 4G service and access between the centre of York and some rural surrounds inhibits rural businesses and households in their everyday activities. A more uniform service is important for facilitating York and North Yorkshire to realise its full economic potential”.