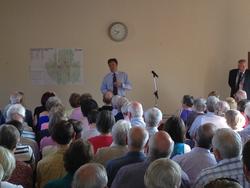 Julian has made a robust defence of York’s established greenbelt in his submission to the consultation on the Council’s controversial draft Local Plan.

In his submission, Julian has attacked the Council for seeking to redefine the boundaries of the established greenbelt and developing 16,000 new homes, 80 Traveller and Showpeople pitches and 40 wind farms on land which has hitherto been protected with greenbelt status. Julian’s key objections to the plan as a whole were over the Council’s calculation of need for the proposed developments, their suitability for a historic Cathedral City surrounded by open countryside and their sustainability or lack thereof. He has also detailed numerous site-specific objections on behalf of his constituents.

The controversial proposals within the draft Local Plan have been the subject of an eight week consultation which closed yesterday. During this time, Julian has hosted eight packed out public meetings for concerned residents and he has written out to thousands of constituents encouraging them to get involved in the consultation.

On the closing of the consultation, Julian said:

“I commend all those York residents who took part in this important consultation over the future of our great City, which I feel has been put at risk by the unsustainable proposals within the Council’s draft Plan. I do not doubt that the vast majority of submissions from local residents expressed concern over the proposals and pressed on the Council the need to rethink their potentially disastrous Plan.

“Looking to the future, I sincerely hope the Council will take their time and consider very carefully all of the issues raised by the consultation participants. While York needs a Local Plan in place, any sense of urgency should not be to the detriment of good plan-making.

“This issue is now likely to fade into the background until early next year when the reviewed Plan is put before the Council and then taken to the Public Inspectors for the second consultation. However, I will be paying very close attention to events over the coming months and continuing to raise the concerns of my constituents, who desperately want to see a suitable and sustainable Local Plan, which will enhance the City whilst protecting its character and setting.”

Pictured: Julian hosting a packed out public meeting on the draft Local Plan in Haxby