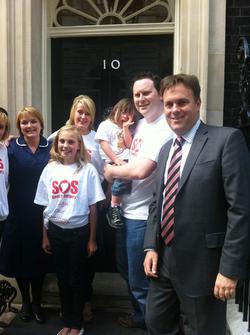 Julian has written to Jeremy Hunt MP, the Secretary of State for Health, to appeal for the Leeds Children’s Heart Surgery Unit to be kept open for at least another year.

The Unit and its supporters have been fighting for its survival for over a year, after the NHS Safe and Sustainable Review outlined the Unit for closure, as part of their charge to reduce the number of Units in the country to achieve greater expertise in each.

Since then, Julian and many fellow MPs in the area have made a number of representations to the Secretary of State, which resulted in the Independent Reconfiguration Panel being set up to review the initial Safe and Sustainable decision. The Panel have now made their recommendations to Mr Hunt and he is due to make his final decision over the future of the Leeds Unit imminently.

In his letter, Julian accepted that the Unit had been the centre of controversy in recent months, but said that he believed it would be in the best interests of people from across the region if the Unit were to stay open. He wrote:

“As you know, Leeds has been at the centre of considerable controversy in recent weeks and months. However, despite the dramatic news stories that have unfolded, the vast majority of my constituents remain strongly in support of the Leeds Unit staying open. Those who have had their children, grandchildren, nieces, nephews or friends cared for at Leeds remain convinced that the Unit provides fantastic services to a very high standard of care and has a committed, friendly and very caring staff.”