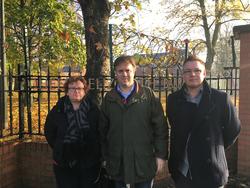 Today, Julian met with Mark Lancaster, the Minister in charge of plans to close Queen Elizabeth Barracks and Towthorpe Lines at Strensall in 2021, and Imphal Barracks at Fulford Road in 2031, at the Ministry of Defence in Whitehall.

Julian emphasised the significance of these changes for the local community, and sought assurances on the risk to local civilian support jobs at these sites, any development plans for these facilities once they are sold off, and the future of Strensall Common.

Mr Lancaster said that the Ministry of Defence were looking carefully at opportunities for redeployment of civilian staff so as to minimise redundancies, and reassured Julian that under the terms of their contracts, a large proportion of affected staff are already guaranteed the option of redeployment to other sites. He also made clear that the government intended to consult with trade unions on the changes well in advance of their implementation, so that staff representatives would be able to have their say on this process.

Julian stressed the fact that as the sites are adapted for alternative use, such as residential housing, it is important that local infrastructure in Strensall is updated in line with these changes. The Minister listened to this, and said that any change of use would depend on decisions taken by the estates and planning team at the Ministry of Defence, and that he would put Julian in touch with these officials so that he could contribute to and monitor their work on this on an ongoing basis. Mr Lancaster said his department were committed to working constructively with City of York Council on the future of these sites, and that the Ministry would keep Julian fully updated.

Julian also asked for reassurances on the future of Strensall Common, a significant part of which makes up Strensall Training Area, and is linked to the Strensall sites being disposed of. As a Site of Special Scientific Interest (SSSI) part of which is owned by the Yorkshire Wildlife Trust, the Common is protected against development. The Minister confirmed that Strensall Common is not part of this package of changes.

Julian said “Although these changes are regrettable in light of the important contribution the York Garrison has made to our armed forces, meeting the Minister has reassured me that the government is committed to engaging sensitively and constructively on this matter with City of York Council and the local community. The Minister’s commitment to providing redeployment opportunities for local staff wherever possible and to engaging with trade union representatives is very welcome.

I am particularly glad that the Minister has agreed to put me in contact with the officials who will be making decisions on the future use of these sites, and I am determined to make clear that any future residential development on these sites must reflect the capacity of local infrastructure, which must be upgraded if new housing is planned. I will continue to engage closely with the Ministry of Defence as the situation develops.”