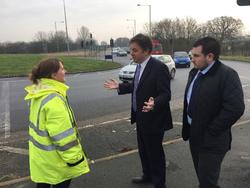 Yesterday, Julian wasted no time in ensuring that the Government’s new Treasury team did not let the Northern Powerhouse agenda slip by drawing their attention to York’s Northern Ring Road (A1237) and in particular the case for upgrading.

Taking the opportunity to raise the matter in Treasury Questions, Julian began by telling the House of Commons that the North was ruled by York during the Medieval ages and although this was no longer the case, the need for excellent transport links remains fundamental to the success of any city. He then pressed the Minister on whether “sufficient funding is in place to deliver key infrastructure needs, like the upgrading of the Northern Ring Road, to ensure that York can reach its full potential?”

Responding, the new Financial Secretary to the Treasury, David Gauke answered that he recognised the case being made, and that the Government was “determined to ensure that there was strong transport infrastructure in the North of England.”

Julian has long argued that the A1237 must be dualled to ease severe congestion between Poppleton and Hopgrove roundabout. In April he wrote a letter urging City of York Council to make an application for a Major Transport Scheme Bid to secure funding for this project and was pleased with the Council’s decision to do so.

Speaking after the session yesterday, Julian said: “at peak times this stretch of road is near impassable and traffic is generally slow throughout the day. Speaking to residents and business owners over a number of years, it is clear that travelling across the city is time consuming, inefficient, and expensive. This is a barrier to economic growth and the consequences stretch well beyond those who live in the immediate vicinity.

“I was pleased that the Minister recognised my concerns and I shall continue lobbying the Government to make sure that York’s needs feature at the heart of its commitment to ‘strong infrastructure in the North’ by ensuring the Northern Ring Road can serve its purpose. I have also secured a parliamentary debate on this issue that will take place in Westminster Hall this September.”