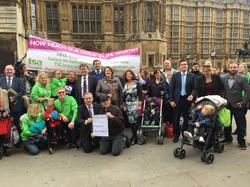 A cross-party group of MPs, led by Julian and Greg Mulholland, are writing to NHS Chief Executive Simon Stevens urging him to make the Everolimus drug available to those suffering from inoperable brain tumours caused by Tuberous Sclerosis Complex (TSC).

TSC is a potentially life-threatening genetic disease that is present from birth and causes non-cancerous tumours to develop in different parts of the body. The tumours most commonly affect the skin, kidneys, heart, eyes, lungs and brain which results in various health problems. In 2011, Everolimus was approved for use on an EU-level to treat brain tumours, but despite a written guarantee that it would be made available on NHS England by this April, this has not happened. If these conditions are left untreated, patients suffer from neurological deterioration, with most dying within two years. However, with this treatment, up to 95% go on to live long, healthy lives.

In their letter, MPs express concern about the prioritisation process and how it disadvantages medicines for very rare diseases.

NHS England’s Clinical Priorities Advisory Group is reconsidering decisions on prescribing policies that were looked at in June. If the decision not to approve Everolimus isn’t overturned, MPs will call for an immediate and thorough reassessment of the draft prescribing policy for Everolimus through a fairer and more transparent process.

The cross-party letter follows a protest Mr Sturdy and Mr Mulholland attended outside Parliament last month and a meeting of families. Mr Sturdy was at the protest with a family from his constituency, who also brought along more families from their area.

The protest and meeting after were attended by families of affected children, campaigners from the Tuberous Sclerosis Association, 15 MPs of all parties, and also well-known actor David Suchet, whose grandson has TSC.

“Not many people will have heard of Tuberous Sclerosis Complex (TSC), but it is absolutely critical that treatments for rare diseases like inoperable brain tumours caused by TSC do not get swept under the rug simply because it affects a relative small group of people.

“Everolimus is a very effective drug which is already used to treat other symptoms of this disease, such as kidney tumours, and it is crucial that NHS England acts to ensure that sufferers of inoperable brain tumours are able to access the treatment they desperately need. I am pleased that our joint letter to Simon Stevens is receiving strong cross-party support, and I hope that NHS England will make the right decision as they review the prescribing policy.”

“For the last two years, I have worked with families, campaigners and MPs and led the #FundOurDrugsNOW campaign. We received a written guarantee that Everolimus should have been approved in April for treating brain tumours. Unfortunately NHS England then changed the way it decides which drugs to prioritise for funding, and drugs for ultra-rare diseases were unfairly disadvantaged. Everolimus, as a result, was then not approved.

“Just 20 young people a year develop these brain tumours and we must not leave them and their families to suffer. Our campaign has received support from many MPs across all parties. We are writing a letter to NHS England’s Chief Executive, Simon Stevens, urging him to consider the decision that was made about Everolimus, and we hope he will deliver the best Christmas present these children and families want.”