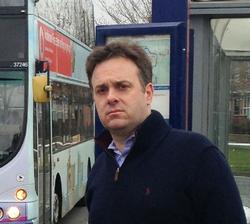 Julian has launched a petition in the village of Rufforth against North Yorkshire County Council’s proposals to withdraw some of the 412 and 413 buses which serve the community.

Under the County Council’s plans, three buses each way are set to be withdrawn from the 412/413 service. The proposed reductions will see buses in the village halved in frequency for large parts of the day and will mean that during the daytime buses will decrease from the hourly frequency down to approximately every two hours.

The proposals are part of the County Council’s wider plans to reduce the overall bus subsidies by £1.1m. Before the consultation on these proposals closed in late November, Julian wrote to the Council’s Director of Business and Environmental Services to express his concerns over the plans. He also wrote to the City of York Council’s Transport Chiefs to encourage them to contribute to the subsidies, in order to prevent the important services from being pulled.

The petition was launched by Julian to put further pressure on the County Council to keep the services in place when it makes its decision on January 7th. He is hand delivering a petition form to every household in Rufforth and petition sheets are also available to sign in the village shop.

On the petition, Julian said:

“Regular and reliable bus services are a real lifeline to our rural communities and every effort should be made to protect them. I hope that with a united response from the community we will be able to put sufficient pressure on both the County Council and the City Council to come to an agreement to retain the services. I would encourage all residents, who feel as strongly as I do that rural bus services should be safeguarded in spite of obvious budget pressures, to sign up to my petition.”