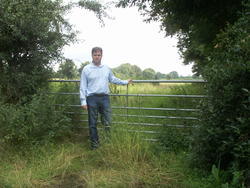 Julian has recently launched an online petition on the City of York Council website, as part of his campaign to protect York’s greenbelt. The move follows the announcement that the Council plan to build large scale housing developments on over 1000 acres of traditionally greenbelt-protected land.

The comprehensive and resolute petition reads:

“We the undersigned petition the council to amend the draft Local Plan and save a number of traditionally Greenbelt-protected sites from being developed upon. The sites which have been earmarked by the Council for large scale housing development include Holme Hill and various plots of land at Clifton Moor, Osbaldwick, Copmanthorpe, Woodthorpe, Haxby and Monks Cross. We want to see the character of our villages surrounding York protected. We acknowledge the need for more housing in York, but believe the figure of 22,000 homes to be too high and the loss of over 1000 acres of Greenbelt land to be unsustainable. We believe it is absolutely vital that Brownfield sites are used first.”

On the petition, which Julian has set up and been the first to sign, he said:

“Given the lack of public consultation that has preceded the publishing of the Council’s draft Local Plan, I am extremely concerned about the effectiveness of the forthcoming consultation period, which will begin when the Plan is voted through by Cabinet on Tuesday. That’s why I think it’s really important that York’s elected representatives do all they can to ensure that public opinion is heard loud and clear in the coming weeks and months.

“This is a detailed petition highlighting many of the concerns of my constituents. I feel it will resonate with a great many people in the York area, as it highlights the Local Plan’s unsustainable housing targets, the lack of any guarantee for investment in infrastructure and the potentially devastating effect it will have on the rural communities surrounding our great City.

“Over the coming weeks and months, I will be working tirelessly in the villages and areas within York Outer, which stand to lose so much of their charm and character if the Council get the go ahead on their plans to drive a Horse and Cart through our Greenbelt. I would encourage all those who care about protecting York’s Greenbelt to join me in signing the petition.”