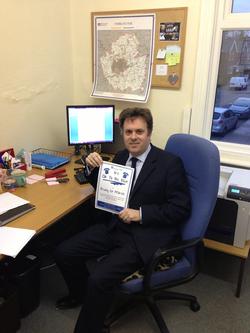 Julian has today offered his support to the mental health charity York MIND and their ‘It’s Ok to Be Blue’ campaign, by wearing blue. His constituency staff have joined him by also wearing blue clothing and have done a collection for the charity.

York MIND is a local charity which offers support to those suffering with mental ill-health in the York area. On their campaign, Julian said:

“With 1 in 4 people being affected by mental ill-health at some point in their lifetime, it’s really important that we as a society try to rid ourselves of the social stigma that surrounds mental health issues. That’s what this campaign is all about; telling people it’s ok to be blue and to need support from organisations like MIND, even if it’s just needing someone to talk to. I would urge all members of our community to join me in supporting MIND and the very important work they do both nationally and here in York.”