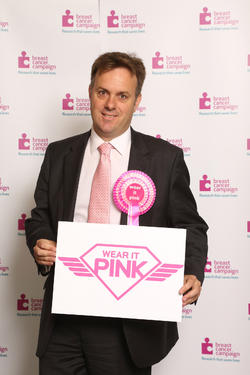 Julian has recently joined the fight against breast cancer by taking part in the Breast Cancer Campaign’s ‘Wear it Pink’ day, the biggest (and pinkest) fundraiser yet.

Over the last 10 years ‘Wear it Pink’ has raised a staggering £23 million and on Friday 25 October 2013 people will come together in schools, colleges and businesses throughout the country to raise vital funds for Breast Cancer Campaign’s lifesaving research.

“Every year in the UK around 50,000 women and around 400 men are diagnosed with breast cancer. Sadly 12,000 women and 80 men die from this disease. This is why we need to support Breast Cancer Campaign’s fundraising efforts so they can continue to fund research which will one day lead to a cure. So join me, wear something pink and donate £2, it’s really as simple as that.”

Breast Cancer Campaign vitally needs the money raised from ‘Wear it Pink’ for its researchers to have the best possible chance to find the cure.