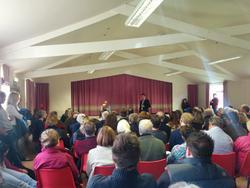 Before Christmas, Julian supported several residents from the village of Naburn who visited the City of York Council’s offices to hand-deliver letters of objection to proposals contained in the draft Local Plan.

More than 60 letters from Naburn residents were delivered, which were added to the dozens of objections already sent by post and email. Residents are concerned about proposals to breach the green belt in Naburn and Fulford parishes for industrial, storage and distribution use and for the development of a site for gypsies and travellers.

Philip Ashworth, representing the village, said “Naburn is a small, rural community but the sheer volume of objections we are delivering today shows the depth of feeling of local residents. City of York Council’s proposals breach National Planning Policy and are entirely inappropriate on green belt land. We expect the Council to listen to local people and remove these proposals from any future drafts of the Local Plan”.

Julian has been a strong supporter of Naburn’s residents and the village’s action group, Save Our Naburn Greenbelt, formed following a packed public meeting he organised with the Parish Council in October. He recently visited the site of the proposed developments with a local farmer and the Chair of the Parish Council, to see first-hand the hugely detrimental impact it would have on the village.

Julian has added his backing to protests, saying: “While many have viewed the recent stalling of the Local Plan as though its many potentially disastrous proposals have gone away, the residents of Naburn have been hard at work. Quite rightly, they have seen the delays in proceedings as an opportunity and have been formulating their already very strong arguments against these proposed breaches of the green belt into a really coherent set of objections. With such a sizeable portion of the village writing in, it is clear that the village of Naburn has spoken. Now it’s time for the Council to listen and to withdraw these ill-thought through proposals without further delay.”

Pictured: Julian addressing over 100 residents of Naburn on the Local Plan proposals in the Village Hall late last year.