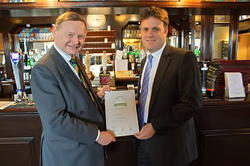 Last Thursday Julian was presented with the new “Beer Champion” award at a ceremony in Dunnington’s Windmill Inn, by Simon Theakston, Executive Director of T&R Theakston Ltd and Yorkshire Chairman of the British Beer and Pub Association (BBPA).

The special award is a joint initiative from the BBPA, Campaign for Real Ale (CAMRA) and the Society of Independent Brewers (SIBA), all of whom wanted to recognize the role of MPs such as Julian who have supported Britain’s national drink during 2013, and especially for their support in scrapping the beer duty escalator, which lead to the momentous cut in beer duty.

All three bodies joined forces again this year which saw duty being reduced for a second year running in last month’s Budget.

Julian said: “I’d like to thank all three organisations for this award, which means a great deal to me.The regional – and national – pub and beer industry needs to be protected, and seeing the pernicious beer duty escalator scrapped was a step in the right direction.

“The government has now gone two steps further by reducing duty on beer in the last two Budgets. This is helping secure jobs and giving breweries such as Theakton’s the confidence to invest in their businesses.”

Simon Theakston said: “I’ve known Julian for a number of years and he has – and continues to be – a champion for our industry. I’m personally delighted to have been called on to present him with this honour.”

Mike Benner, Chief Executive of CAMRA, said: “This reward recognizes Mr Sturdy’s invaluable support in the campaign to scrap the beer duty escalator. He really helped in drawing attention to the harm caused by tax increases totaling 42 per cent over four years.”

Brigid Simmonds, Chief Executive of the British Beer & Pub Association, said: “I want to thank Mr Sturdy for making a huge difference in achieving the historic duty cut in 2013. We are delighted to honour this achievement in the best way possible – with a great new beer.”

Keith Bott, SIBA chairman, said: “The small, local brewers, who make up the bulk of SIBA’s membership, applaud the work of Mr Sturdy in the campaign to scrap the Beer Duty Escalator last year. Brewers now feel more confident about the future of the UK’s brewing industry, and able to make long term business plans.”