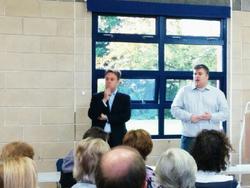 Over the past two weekends Julian has hosted two public question and answer meetings on the City of York Council’s Local Plan Publication Draft proposals, each with over 100 residents in attendance.

The meetings took place in Rufforth and Naburn, where the residents of both villages are deeply concerned about the Council’s plans to establish large traveller sites nearby.

The Local Plan Publication Draft proposes a 30 pitch gypsy & traveller site immediately south of the Harewood Whin Waste and Recycling Centre, on Wetherby Road approximately one mile from the village of Rufforth and the same distance from nearby Knapton.

The meeting at the Rufforth Community Hall covered the various grounds for objecting to the site, including the greenbelt and Traveller site planning policy, transport and school capacity issues and the safety and welfare of the potential site occupants, living so close to a landfill site and on a busy road with no footpaths.

In Naburn, where a 15 pitch site has been proposed just south of the York Designer Outlet, residents similarly voiced concerns over the impact on the greenbelt, the Council’s inaccurate assessment of need and the effects on the prosperity of the hitherto very successful Designer Outlet.

At the Naburn meeting, Julian said:

“For me it’s really important we have a Local Plan. But we have got to have the right Local Plan and it’s driven by local people and local needs. 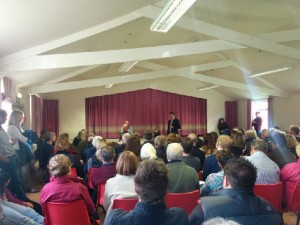 “I really have grave concerns about the way the Council has assessed the needs of travellers. They say we need over 50 pitches. If there is such a shortfall we would see illegal encampments across the city and we don’t see that.”

After both meetings, it was agreed that village action groups would be set up by the local residents and community representatives to fight the proposals, with assistance from Julian and the local ward Councillors.

If you want to get involved or find out more about the action groups, email Julian at julian.sturdy.mp@parliament.uk. A website has already been set up for the Rufforth & Knapton Group and it can be accessed here: http://www.rufforthaction.com/.

Pictured: Julian with the leader of York’s Conservative Councillors, Chris Steward, at the meeting in Rufforth (top) and with local ward Councillor George Barton and representatives from the Parish Council in Naburn (bottom).