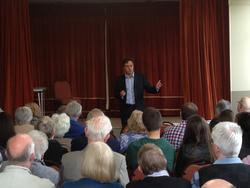 Julian has hosted a public meeting in Upper Poppleton for residents concerned by the many controversial proposals contained within the Council’s draft Local Plan. However, the meeting, which took place on Saturday at the All Saints Hall, was primarily focused on the Council’s plans to create a 20 pitch travelling showpeople site, in the nearby village of Knapton.

At the widely attended meeting, Julian outlined in detail the many proposals within the draft Local Plan and reiterated his staunch opposition to the proposed Knapton showpeople site. He encouraged as many residents as possible to take part in the upcoming consultation process, by making their objections known to the Council.

When the Council’s divisive housing targets were raised, Julian said that he believed the proposals to be completely unsustainable, with the whole York area set to become a building site for the next 15 years. On the Council’s equally contentious plans for 40 wind farms to encircle the City, Mr Sturdy again said that he would be fighting tooth and nail to ensure they are not given the go ahead and he had already written to the government on this issue.

“It goes without saying that I am deeply concerned about a number of the proposals within the Council’s draft Local Plan. Not only have they been playing politics, by dumping all of the City’s unwanted developments on York’s greenbelt and causing great distress among my constituents, they have also been decidedly slow in notifying those who will be affected by their ill-thought through plans. The message coming out loud and clear from my meeting on Saturday is that local residents won’t stand for it. I’m glad to see that so many people from across my constituency are coming together to form action groups to build strong objections to the proposals.

“As the Council dither on how they will consult the public, I will, in my role as the York Outer MP, be doing my utmost to ensure that all of my constituents are aware of what is at stake and what they can do to stop the proposals from getting the rubber stamp. I will therefore be hosting a series of public meetings around my constituency and publicising them widely to help get the message across. My challenge to the Council is to listen and to act upon the views of my constituents, who understandably feel that they’ve been forgotten by their local authority.”