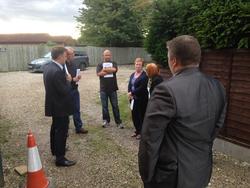 On Wednesday evening, Julian hosted an on street meeting for the residents of Sawyer’s Crescent, Copmanthorpe, which was flooded with several inches of raw sewerage during a flash period of heavy rainfall in August.

Several Sawyer’s Crescent residents got in touch with Julian after 8th August when 31mm of rain fell in just three hours and caused both the sewerage and surface water drains to become overloaded and spill out onto the street. Thankfully, the foul water did not enter any properties, but several residents complained that it rose to within an inch or two of their airbricks and had the rain continue any longer, a number of properties would have been spoiled.

Julian immediately wrote to Richard Flint, the Chief Executive of Yorkshire Water, as well as the City of York Council’s Flood Risk Team, to reiterate his constituents’ concerns and to find out what steps they were taking to ensure the problem does not occur again. Mr Flint reported that the a soft blockage in the main foul sewer and the heavy rainfall had combined to cause the problem, but said that Yorkshire Water were also investigating accidental cross connections between the surface water and foul drainage systems.

However, after discussing the historic nature of the problem with the group of concerned residents, Julian has agreed to arrange a further meeting for those affected with representatives from Yorkshire Water and the Council present.

“As a local MP, it’s really important to me to be regularly out in the community listening to my constituents’ concerns, whatever they may be. I have to say I was truly appalled to hear of the Sawyer’s Crescent residents’ experiences, both on this fateful night in August and during several previous incidences. They cannot continue to live in fear of bad weather and I am concerned that there is a real danger that the next time it happens properties could be damaged. With Sawyer’s Crescent at one of the lowest points in the village and the Council proposing several hundred extra houses in Copmanthorpe as part of the Local Plan, the risk is bound to increase.

“I’m pleased that Yorkshire Water have responded quickly in this particular instance, but I want to see them doing more, alongside the Council, to prevent this from ever happening again. As such, I have written to both authorities to ask them to come out and talk to residents on site to improve their local knowledge of the problem, in the hope that a more permanent solution can be found.”

A resident who attended the meeting added:

“The residents of Sawyers Crescent would like to pass on their sincere thanks to Julian following his visit to Copmanthorpe.  We are extremely grateful for the time that Julian has spent writing to the relevant authorities and visiting us and look forward to meeting with him again soon. It’s very reassuring to know that our MP is so dedicated to helping his constituents.”

Also in attendance at the meeting was local Ward Councillor, Chris Steward and the Chairman of Copmanthorpe Parish Council, David Carr. 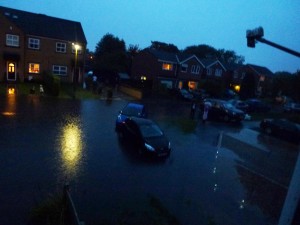 Pictured: (top) Julian, Cllr Steward and Cllr Carr discussing the problems with local residents; (above) A snap of the flooding on the evening it occurred.