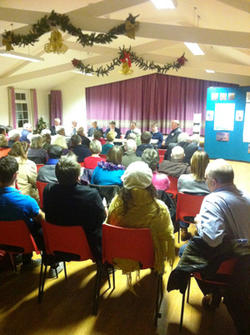 Recently, Julian hosted two on site meetings for the victims of flooding in Fulford and Naburn. In attendance at both meetings were a number of residents, alongside representatives from the Environment Agency, Yorkshire Water and the City of York Council’s flooding teams.

The residents of cottages on the banks of the Ouse in Fulford met outside their homes to highlight to their MP and the relevant flooding agencies their concerns that they had received insufficient warnings about the scale of expected flooding in September. They also raised their concerns over recent works done by Yorkshire Water to the local pumping station and they effect they have had on the height of the river bank. The meeting ended positively with all bodies agreeing to work together to ensure residents receive greater warnings and improved assistance for any potential future flooding.

Later, in Naburn, Julian’s meeting achieved an impressive turnout from residents and took the form of a Question and Answers session with Julian in the Chair. The panel was again made up of representatives from the main three flood management bodies, but also included a Drainage Board representative and Councillor George Barton.

The issues discussed at Naburn were extensive, but of particular concern for many residents were the failings of valves in the drains on Palmes Close, which resulted in seven houses on the Close being flooded this September. It was agreed that the relevant agencies would meet with an action group from Naburn to discuss potential cost effective options for improving flood risk management in the near future, such as better sandbag provision and a mobile pumping unit.

“I am extremely grateful to the representatives from the Environment Agency, the Council, Yorkshire Water and the Drainage Board for taking the time meet with the victims of flooding in York Outer.”

“The Fulford meeting was extremely positive and I look forward to working with the relevant agencies to ensure that my constituents will be better provided for, should flooding of this scale occur again. In Naburn, flooding issues are wide-ranging and ongoing. However, I believe Friday’s meeting was a real positive step in the right direction. The relevant agencies have been made fully aware of the problems in Naburn and must work closely together in the near future to lessen the effects of persistent flooding on the village. I remain hopeful that a further meeting in January will produce some positive results for my constituents in Naburn.”

“I am hoping and praying that remaining winter months will pass without further incidence of flooding in our area.”