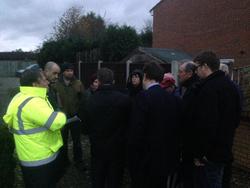 Yesterday evening, Julian hosted another on street public meeting for the residents of Sawyer’s Crescent, Copmanthorpe, whose street was flooded with several inches of raw sewerage following a flash period of heavy rainfall in August.

Several local residents in the area had contacted Julian when 31mm of rain fell in just three hours on 8th August, causing manholes to burst open and dirty water to seep out onto the street. It came within inches of entering some of the houses and many of the residents were fearful for the impact on their health.

Julian had already hosted an on street meeting with the residents back in September. Following this initial meeting it was agreed that representatives from Yorkshire Water and the City of York Council should be invited out to discuss potential resolutions and gain local knowledge from the residents.

After writing to both bodies Julian was pleased to be joined by Flood Risk Engineers from the water board and the local authority at the residents meeting last night. They reported that the incident had largely occurred because of the combination of the heavy rainfall and a blockage in the foul water sewer. However, Yorkshire Water agreed to carry out further investigations of the surface water drainage system, after suspicions were raised about cross connections.

Commenting, Julian said: “I’m really pleased that we have now identified the causes of this incident and I’m glad that the responsible agencies are now giving this quiet cul-de-sac the attention it deserves. I will continue to work with the local residents, Yorkshire Water and the Council to ensure that everything is done to prevent this awful problem from ever having to occur again.”

One resident who attended both meetings added: “The residents of Sawyers Crescent would like to pass on their sincere thanks to Julian following his visit to Copmanthorpe. It’s very reassuring to know that our MP is so dedicated to helping his constituents.”

Following the meeting, Julian has pledge his support for Yorkshire Water’s new campaign to educate people against putting the wrong things down toilets, sinks and drains. He said: “It is clear that blocked drains and the resulting surface water can cause a huge amount of damage and to people’s homes. I am pleased that Yorkshire Water are investing the necessary resources into fixing the problem and I am happy to support their ‘Winter Ready’ Campaign.”

Pictured: Julian at the recent meeting with Sawyer’s Crescent residents and representatives from Yorkshire Water and the City of York Council.