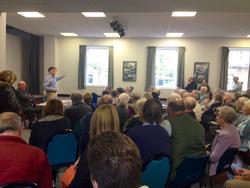 On Saturday, Julian hosted a public Q&A meeting in Elvington on the Local Plan Further Site proposals in the area.

With the many controversial development proposals put forward in Elvington and the surrounding communities, including a 7 pitch Traveller site, a 3 pitch Travelling Showpeople site and several housing sites, it was no surprise that the meeting was packed out, with 200 local residents in attendance.

“The fantastic turnout at the meeting was testament to the strength of feeling in Elvington and the surrounding villages about the many development proposals put forward by the Council in the area. Let us be under no illusions, the villages of Elvington and Wheldrake and the surrounding areas are facing completely unsustainable and inappropriate development of a scale virtually unseen anywhere else in the ‘Local Plan Further Sites’ document.

“Understandably, the primary focus of the meeting was the completely unsuitable allocation of greenbelt land for Travellers’ pitches in the village and I’m very pleased that, off the back of the meeting, an Action Group is being drawn together to fight this and the many other unsustainable development proposals being put forward. I join local Councillor George Barton in urging all residents to submit their views to the Council as part of the forthcoming consultation.”

Pictured: Julian at the Public Meeting in Elvington