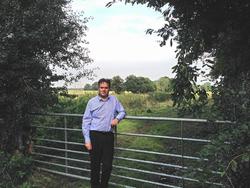 This afternoon, Julian will host a half hour debate in Westminster Hall on land ‘safeguarded’ for future long term development in Local Plans.

Julian is a passionate supporter of York’s greenbelt and he has been a vocal opponent of the City of York Council’s draft Local Plan since it was first announced in April 2013. The Plan currently proposes 16,000 houses, over 60 Traveller and Showpeople pitches and over 40 areas of search for wind and solar farms on York’s greenbelt. In addition, the Council propose to remove 1000 acres of land from the greenbelt and ‘safeguard’ it for future development beyond the 15 year life of the Plan.

Last month the Council announced their second batch of proposals, known as the ‘Local Plan Further Sites’ recommendations. This document proposes a net increase of 162 acres in the amount of ‘safeguarded’ land in the Plan. Proposals include a 220 acre site to the East of Earswick, which, if developed, would triple the size of the village.

Julian is particularly concerned about the ‘safeguarding’ of greenbelt land because he fears the Council will succomb to pressure from developers and bring it forward for development ahead of the 15 year life of the Plan. He is also firmly of the belief that the ‘safeguarded’ land allocations are unnecessary and during the debate he will draw on comments previously made by the Planning Minister, Nick Boles MP, that:

“There is nothing in the Localism Act 2011, in the NPPF or in any aspect of Government planning policy that requires someone to plan beyond 15 years. So, anybody who is suggesting that there is any requirement to safeguard land or wrap it up in wrapping paper and ribbons for the future development between 2030 and 2050 is getting it wrong. There is no reason for it and my hon. Friend can knock that suggestion straight back to wherever it came from.”

Commenting ahead of the debate, Mr Sturdy said:

“I welcome the opportunity to debate this extremely important issue not just for York’s future but also for the future of many of our greenbelt towns and cities across the Country. I will be calling on the Government to do more to ensure our local authorities are aware that there is no requirement to ‘safeguard’ land for future development and at the same time, I will be urging the City of York Council to pay very close attention to this point.”