Julian hits out at Council’s plans to cut gritting budget 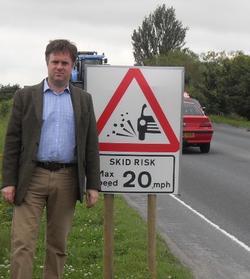 The City of York Council is planning to reduce the Winter Maintenance budget by £60,000, leading to many roads being downgraded on the gritting routes. Conservative Councillor George Barton has already criticised the policy, but now Julian has also waded into the debate.

In a letter to Roger Ransom, the Council’s Assistant Director for Highways, Julian expressed his concern and disappointment with the proposals. He wrote that the rural communities within his constituency could be cut off from the City Centre and remain isolated throughout the winter as a result of the cuts. He also suggested that the cuts could risk the safety of his constituents, a good proportion of whom are elderly and vulnerable.

In his letter, Julian wrote:

“I appreciate the financial climate is still difficult and local authorities must make tough decisions in order to save money. Ultimately, however, it is the local authority’s responsibility to make these choices and sadly I don’t feel that the current choices being made by the Council are truly reflective of the needs of York and the surrounding communities. Cuts to essential frontline services appear to be compromising safety, whilst going hand in hand with extravagant, expensive and non-essential projects, such as the Council’s new West Offices and the proposed Arts Barge.”

Julian also criticised the Council’s online consultation as having being tailored to ensure that responses could only support a pre-determined outcome.

“The questions have very much been tailored to ensure that any respondents are not given full opportunity to comment on the overall proposals, but are merely asked to assign priorities to different road types to facilitate the Council’s plans to downgrade others.”