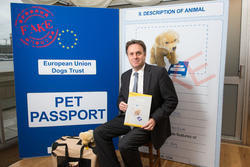 Yesterday Julian met with the Dogs Trust to highlight the growing concerns surrounding puppy smuggling across the country.

The Dogs Trust has recently completed a report into puppies travelling illegally into Britain on fake passports under the EU Pets Travel Scheme. The charity found widespread evidence of animals being bred in horrendous conditions in Eastern Europe before being sold to unsuspecting families in the UK.

To emphasise how easily unethical dealers are able to bring underage, sickly, or undocumented puppies into the country, Julian was photographed standing in front of a giant fake pet passport and next to the toy puppies that the Dogs Trust smuggled through Britain’s ports. This was part of their investigation to illustrate the ineffectiveness of current controls.

Commenting on the event, Julian said “As a dog lover myself I am pleased to support the Dogs Trust in raising awareness of the cruel practice of illegal puppy smuggling. Not only are puppies being sold with diseases and parasites, many are also travelling long distances in cramped conditions whilst they are still very young. The welfare of our pets should always be our first priority. We need to do everything we can to crack down on the illegal puppy trade and make sure our animals are protected from being abused by unscrupulous traders”.

Mr Adrian Burder, Chief Executive of the Dogs Trust, added “As we approach the festive period, I would like to remind anyone thinking of getting a dog to do their research and ensure they know where their dog is coming from before making the decision to bring a four legged friend into their home. Dog lovers could inadvertently be lining the pockets of unscrupulous breeders and fuelling the illegal puppy smuggling trade.”