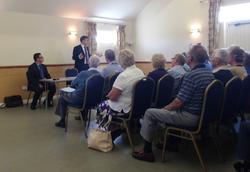 After urging the Council not to forget the residents of Huntington in the Local Plan consultation, Julian has welcomed the Council’s decision to host a 6 day Local Plan exhibition at Huntington Library.

In a recent letter to Martin Grainger, the architect of the Local Plan, Julian expressed his concerns over the absence of Huntington in the list of the Council ‘drop in’ consultation sessions. The Council have now announced that there will be unmanned exhibition, including maps, response forms, leaflets and key documents, in Huntington Library from Monday 22nd July to Saturday 27th July.

Julian has himself been hosting a series of public meetings across his constituency on the Local Plan. On Saturday, he hosted back to back public meetings in Woodthorpe and Huntington.

“I was really disappointed when I first learned that the Council were not intending to host a Local Plan exhibition in Huntington and the feedback I got from Huntington residents at my public meeting on Saturday was much the same. This is a community in which over 2000 new homes have been proposed and at first, it appeared the Council were willing to do almost nothing to raise awareness of the proposals and engage the local residents.

“I’m glad that, after some strong encouragement, the Council have had a change of heart and the residents of Huntington will now have the opportunity to view and respond to the Local Plan, which I fear will have a big impact on the local community if approved in its current form.”

Pictured: Julian hosting one of his recent public meetings on the Local Plan