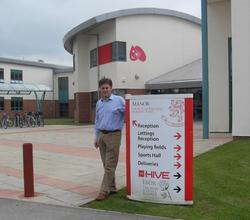 Julian has waded into a debate over the future of free concessionary transport to students of Faith Schools in the York area, after it emerged that the City of York Council was planning to completely withdraw the services from September.

Several parents of children attending Manor CE School in Julian’s constituency were in touch to express their grave concerns over the proposals, which many felt were discriminatory against Christians and would jeopardise the safety and wellbeing of their children by forcing them to take two buses via the City Centre to get to School every day. Families from communities including Copmanthorpe, Dringhouses, Clifton Moor, Skelton, Hessay, Rufforth, Askham Richard and Askham Bryan in Julian’s constituency stand to be affected.

However, as a result of the representations made by the parents, members of staff at Manor CE School and Julian, the Council has deferred the decision to a later date to allow Officers to further investigate the concerns raised.

Julian was delighted that the Council have backtracked on the plans, however he will be paying close attention to events and if they decide to push ahead with the proposals, he will be working closely with the School to do whatever he can to stop them.

“The government guidance is clear in discouraging the disturbance of ‘well established arrangements’. It also states that ‘local authorities should ensure that transport arrangements support the religious or philosophical preference parents express’ and yet the Council is proposing to introduce a policy which many parents believe is tantamount to discrimination against Christians.

“Moreover, the travel routes that the Council expects the pupils to undertake on a daily basis are, for many, unrealistic and grossly unsympathetic .Indeed, some parents have expressed concerns over the safety of their children, in making two journeys to the City Centre every weekday in order to change buses; not to mention the cost!

“I welcome the Council’s decision to investigate the implications of these proposals further before pushing ahead with them. If they do decide to pursue the plans, I’ll be doing my utmost to represent the many parents and children in my constituency who stand to be greatly disadvantaged by these inconsiderate proposals.”