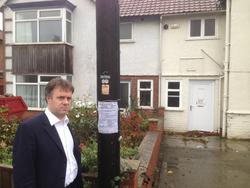 Julian has again registered his concern with planning officers about the resubmission of proposals for the development of a house of multiple occupancy (HMO) at 550 Huntington Road.

Following the withdrawal of previous plans to convert both 550 and the neighbouring 548 into HMOs, after a strong community backlash, plans were resubmitted for a HMO at 550 Huntington Road.

“There are many reasons why this development is inappropriate,” Julian said. “The property is located between two schools, and the lack of parking outside the property means more vehicles would probably have to be parked on the pavements. With the site also in the close vicinity of a bus stop, it clearly presents a danger to school children. I am also concerned by the loss of family accommodation, which is a worrying trend across York.”

Some residents are concerned that if this application is successful, then the development of 448 Huntington Road would follow shortly after.

At a recent Parish Council meeting many residents voiced concerns about inadequate parking, drainage issues, increased danger for cyclists on the cycle tracks running in both directions, the location of the exit of the property by a blind corner, and the impact the development would have on the character of the neighbourhood.

Julian added: “I do not object to HMOs in principle, but their location and impact on the local community must be very carefully considered.

“I am concerned that this development would have a great bearing on local people, with many vocally opposing the plans. It is reassuring to see residents coming together to object to proposals which they believe will have a damaging effect on the local community.”

Pictured: Julian outside the proposed HMO on Huntington Road.