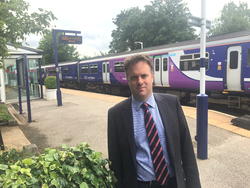 Following last month’s announcement that the TransPennine electrification project has been temporarily paused, Julian questioned what impact this could have on York’s future rail infrastructure.

Speaking in the Chamber, Julian asked the Transport Secretary, Patrick Mcloughlin, “Whilst welcoming the huge investment in rail services by this Government over the last five years, can I ask the Secretary of State what implications the pause, and stress the word pause, might have to the York-Harrogate-Leeds line electrification ambition and future links to Leeds Bradford Airport, which are so important?”

In response, the Transport Secretary assured Julian that the upgrades would be taken into account during Network Rail’s Control Period Six, which begins in 2019. The Transport Secretary also said that increased investment in the North’s railways will boost capacity into Leeds and Manchester by 36%. TransPennine links will also be improved, including through electrification, as part of the Government’s commitment to the Northern Powerhouse. York is also set to benefit from 65 extra trains in five and nine carriage formation, serving the region from 2018 onwards.

Following Transport Secretary’s comments, Julian said “It is essential that York benefits from improved rail links with the surrounding region, particularly Leeds Bradford airport. A dedicated rail link with Yorkshire’s largest airport will unlock much needed investment for York and could have a transformative impact on our local economy.

“I am delighted that the Transport Secretary has confirmed that the investment is still on course to be delivered from 2019 and has been unaffected by the delay in the TransPennine electrification project.”

Following the appointment of the new Network Rail Chairman, Sir Peter Hendy, Julian said he will be leading the charge amongst Yorkshire MPs to make sure that electrification plans are resumed as quickly as possible, and that we will continue to champion rail investment for York in the future.